how to Remove duplicates from List<String[]>

Hello all,
can anyone please give me an idea how to remove duplicates from below list string array

Please let me know like how can I implement this in optimized way.. 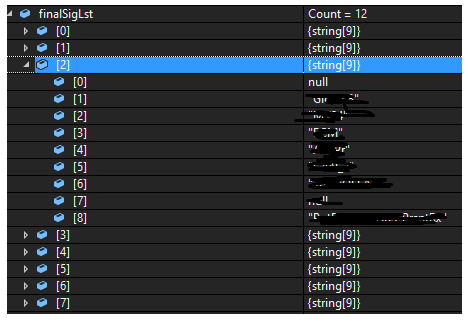 How are you setting the data in your string array?

Where you are doing that is where you prevent the data from being set which you don't want duplicates of.
Upvote 0 Downvote
N

If you use a Hashset, you can avoid duplicates being entered. If you don't want to go that route, you will need to apply some filters to check your current string array for the values being processed against the entries you already have in your array.
Upvote 0 Downvote
J

Assuming that you cannot prevent the duplicates getting into the list in the first place, here's an option for removing them. Firstly, define this class:

C#:
You can then use the class like this:

C#:
Two things to note there:
I don't think the first point will be an issue for you but, if the second point is a problem, let me know and I'll provide an implementation for the more complex option of removing items in-place.
Why is my data not saved to my database?
MSDN: Data Walkthroughs | "How Do I?" Videos
My Blog: Custom Events | Data Among Multiple Forms
Beginner Tutorial
Upvote 0 Downvote

ram_rocks said:
1) in some of the rows I have same data in all columns and I would like to remove that from list
Click to expand...

With my interpretation, I would have done something like:

and if you see row2 and row4, 4th index is different so I would like to keep them
Upvote 0 Downvote
R

With my interpretation, I would have done something like:

and if you see row2 and row4, 4th index is different so I would like to keep them
Upvote 0 Downvote

I recommend using Distinct() variant that uses an IEqualityComparer.

U
Question How to populate a nested list of objects?