I have a graph problem to solve and I'm wondering if my approaching technique is right?

The problem paragraph is :
((
Have the function GraphChallenge(strArr) take strArr which will be an array of strings which models a non-looping Graph. The structure of the array will be as follows: The first element in the array will be the number of nodes N (points) in the array as a string. The next N elements will be the nodes which can be anything (A, B, C .. Brick Street, Main Street .. etc.). Then after the Nth element, the rest of the elements in the array will be the connections between all of the nodes. They will look like this: (A-B, B-C .. Brick Street-Main Street .. etc.). Although, there may exist no connections at all.
An example of strArr may be: ["4","A","B","C","D","A-B","B-D","B-C","C-D"]. Your program should return the shortest path from the first Node to the last Node in the array separated by dashes. So in the example above the output should be A-B-D. Here is another example with strArr being ["7","A","B","C","D","E","F","G","A-B","A-E","B-C","C-D","D-F","E-D","F-G"]. The output for this array should be A-E-D-F-G. There will only ever be one shortest path for the array. If no path between the first and last node exists, return -1. The array will at minimum have two nodes. Also, the connection A-B for example, means that A can get to B and B can get to A.

Breadth First Search or BFS for a Graph - GeeksforGeeks 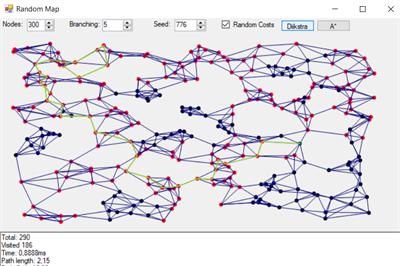 A comparison of Dijkstra and Astar

www.codeproject.com
and many more. I've read the code and description but I think that my problem is a little bit easier than (BFS). I'll explain shortly, but first you've to look at my attached image to understand what I am thinking of. My idea is, if there is no consecutive two nodes, then we can ignore that edge or path and continue with the rest. For example, fro A to B, then from B to C, but after that cam A to C, then we can ignore the last two paths (A-B) and (B-C) and then continue with the rest of paths that way. So, all I need is to compare the two consecutive nodes with the joined paths. My starting code:

my starting code to solve graph problem:
I'm not searching for a code, I just want to know if my approach to solve the problem is right or wrong? and if it's wrong, what is the right way ?
Thanks in advance.

The beauty of Djikstra's algorithm is its simplicity:

What is the shortest way to travel from Rotterdam to Groningen, in general: from given city to given city. It is the algorithm for the shortest path, which I designed in about twenty minutes. One morning I was shopping in Amsterdam with my young fiancée, and tired, we sat down on the café terrace to drink a cup of coffee and I was just thinking about whether I could do this, and I then designed the algorithm for the shortest path. As I said, it was a twenty-minute invention. In fact, it was published in '59, three years later. The publication is still readable, it is, in fact, quite nice. One of the reasons that it is so nice was that I designed it without pencil and paper. I learned later that one of the advantages of designing without pencil and paper is that you are almost forced to avoid all avoidable complexities. Eventually, that algorithm became to my great amazement, one of the cornerstones of my fame.

— Edsger Dijkstra, in an interview with Philip L. Frana, Communications of the ACM, 2001[5]
Click to expand...

The beauty of Djikstra's algorithm is its simplicity:
Click to expand...

ok, I get it, that's cool, I will read carefully Dijkstra's algorithm and try to apply it. Thanks a million.
Upvote 0 Downvote

Out of curiosity, where are you getting all these "challenges" that you are working on? It's kind of strange for them to be asking questions that great CS questions, but then at the same time not following best practices like being "stringly" typed and using Hungarian naming conventions in C# code.
Upvote 0 Downvote

Hello @Skydiver , how can I send you a private message?
I want to clear your curiosity
Upvote 0 Downvote

W
Compare lists and display on a separate line

I have a problem and I already solved it, but I am searching for enhancement.
2